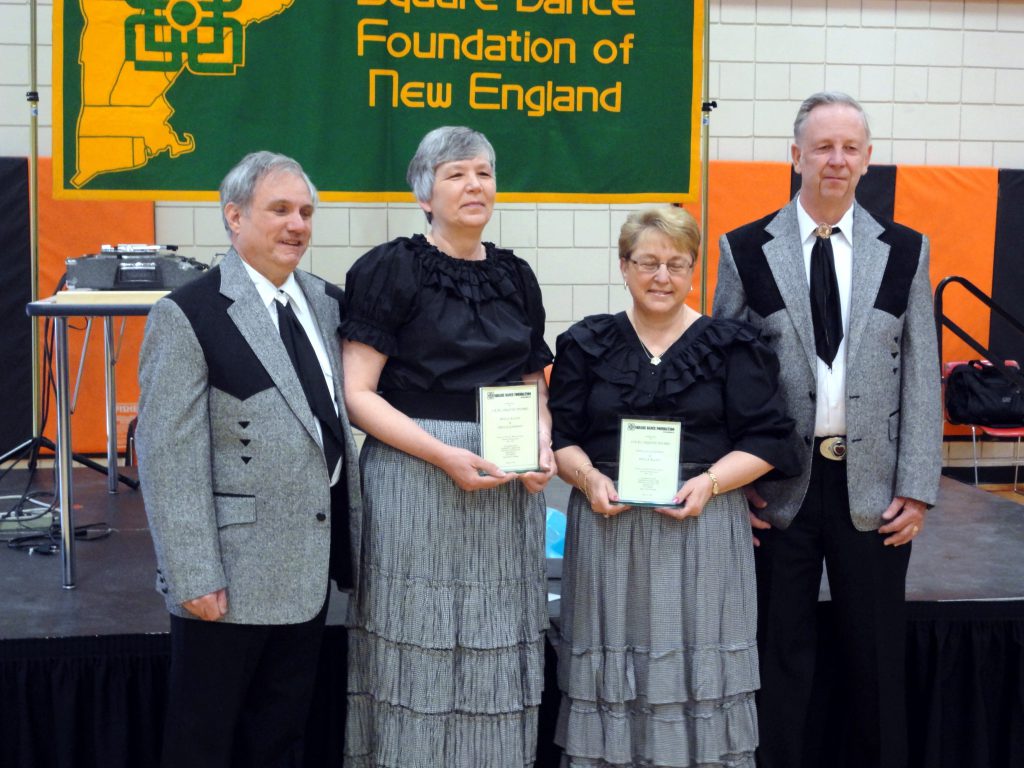 LOCAL LEGEND AWARD
PRESENTED TO PAULA ALLEN & SHEILA GOODWIN
MAY 1ST, 2011
Almost everyone present in this room knows the 2 couples who are standing here. Sheila & Dick Goodwin were married in 1970 and have a daughter Marcy, and a grandson Nathan. Paula & Bill Allen were married in 1975 and have a son Bill, and a grandson Michael. Paula & Bill Allen met Dick & Sheila in 1975 when they decided to take square dance lessons. Miles Eastman was their caller. Not only did they become friends, but teamed up to become Banner Chmn, Class Chmn, Refreshment Chmn, Secretary, Coordinator, Vice President, and President of Two Hearts As One in Gardner, MA. Sheila became Worcester Area Club Association representative, and along with Paula, was Co-Chmn of the 25th, the 30th, & the 35th Club Anniversary Dances and the Clubs Farewell Dance. Paula organized the Clubs Christmas parties.
Sheila & Dick didn’t take round dance lessons, but Paula & Bill did for one year. Vern & Rudy Boudreau were the round dance teachers. Both Sheila & Paula and their spouses have been square dancing for 36 years.
Not only did they take on square dance responsibilities, but they were also very active in community services. The Allens were involved in scouting and after that became treasurer and wore many other hats for the Gardner High School Soccer Booster Club. The Goodwins worked on many Chamber of Commerce events and fundraisers hosted a foreign exchange student for the Gardner Rotary Club as well as for the Mount Wachusett Community College exchange program.
In the fall of 1992, Paula and Sheila took over the existing Claudias Western Shoppe in Gardner, MA. That shop opened its doors in 1964 when Fred & Claudia LeBlanc decided to turn their small basement apartment into a shop for the square dance community in Central Massachusetts. The LeBlancs continued the shop until 1992 when they decided it was time to call it quits and made an offer to Paula & Sheila. Not knowing what was in store for them, and working at fulltime jobs, they decided to bite the bullet and go for it. They begin looking for new ways to accommodate the square dancers in the Worcester area by doing fashion shows at the local lesson nights, using new dancers as models. Some of these models are still their customers today. Little did they know that 19 years later they would be traveling to festivals all over New England and New York as well as doing special events in Massachusetts. This year marks the 18th NESRDC they have attended. They have been exhibitor chairman for 4 of these conventions, and will be chair again in the upcoming NESRDC in Hartford, CT.
It is with great pleasure that the Square Dance Foundation of New England presents the local legend award to Paula Allen and Sheila Goodwin, co-owners of Claudias Western Shoppe.