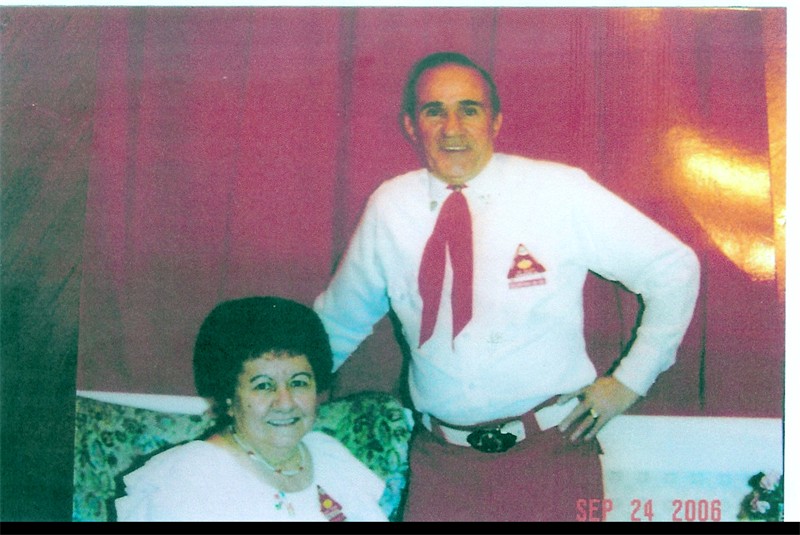 Claire and Joe are the southern New Hampshire region’s good will ambassadors of Square and Round Dancing. They learned to dance in 1968 with the Heel & Toe Square Dance Club. It was a time when they graduated after a few lessons. In 1970 they joined the Queen City Promenaders and continued their dance lessons with caller Ron Hebert. They thoroughly enjoyed round dancing followed by square. They were part of a group of dancers who learned from Harold Wiles when he himself was learning to cue. The Belaski’s also danced with the Allemande 8s. I know of no other dancers who brought the three clubs together for various events and occasions. Being strong dance advocates, they are well known within the region for arranging banner raids and visitation to and from local clubs. They served as Vice Presidents of Queen City Promenaders in 1974 and then as President in 1975. During that year their Vice President moved away and the Secretary was ill, so they handled all three positions. They returned as Secretary in 1980 and developed a relationship and outstanding line up of guest callers and cuers. In 1983 and 1986-87 they were membership chairmen. Claire developed a telephone communication system with the membership body. She became the go to person for all the members, keeping them informed of all club activities. They returned, talk about officer recycling, as Secretary in 1992-1993-1994-1995-1996-1997-1998 & 2001 (a total of 10 yrs.) during QCP’s life span. When the going gets tough the Belaski’s meet the challenge. They served as President in 1999 & 2000. They angel’d every class that came down the pike, giving dancers the encouragement and opportunities to dance together. Valiant efforts were made to promote and have a class in recent years. There was a period of time that the club was down and out financially and they were part of a small group that held summer time yard sales to provide funding for the next season. Needless to say, they served on numerous committees over the years and did their part without fail and always wore the QCP Smiley Mascot smile. Attendees were always welcomed to dances by the Belaski’s. Some of our fondest memories were club committee activity on special Anniversary dances and Christmas dances in which they were involved along with other members. There was a time when they danced 5 days a week, visiting area clubs. Joe and Claire served on the 1979 & 1980 Manchester – New England Square and Round Dance Convention as housing chairmen. They were club delegates to EDSARDA as long as we can remember. They were always involved in QCP group attendance and activities at all the New England Conventions.  The Queen City Promenaders spawned 3 couples who went on to serve the New England Square Dance Community and were recipients of the Yankee Clipper Award. The Belaski’s organized a testimonial dinner/dance for each occasion. They served for a short time, during a transition period, as membership chairmen of the Square Dance Foundation of N.E. Joe has assisted on a number of occasions with carpentry work at the archive center.  They worked hard at the local level in the promotion and preservation of the activity.  They represent a dedication and loyalty to the dance activity that they love. More importantly, they had a way of bringing people together for the enjoyment of dance and the comradery of building friends, wherever they traveled, wherever they danced. The Square Dance Foundation of New England in its first year of recognizing regional people who have had a major impact in a given area presents this Local Legend Award to Joe & Claire Belaski.