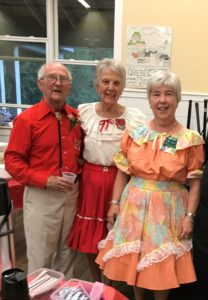 The LOCAL LEGEND AWARD was established to honor those individuals and couples who have advanced the goals of the SQUARE DANCE FOUNDATION OF NEW ENGLAND by their actions within their local areas. These goals are the Promotion, Preservation and Perpetuation of the square and round dance activity.
Anne began square dancing with Country Corner Squares in 2003. She partnered with Dale Deblois and they have danced together ever since. As a club member, she has participated in all types of club activities over the years; parades, demonstrations, picnics, banner raids, social get-togethers, and always class nights and Country Corner Squares dances. At club dances she is always there to help with set up and clean up. She keeps records of banner raid counts and years of club membership for end of year dancer awards.
Anne & Dale began taking Round Dance lessons from Doc & Peg Tirrell and they’ve continued with Barbara Connelly for a total of 13 years. They are most often found in the round dance circle. They have traveled around the United States to visit family and friends mentioning specifically Kansas, Florida and Arizona. Both recalled square dancing to hymns in Kansas.
Anne is always cheerful, encouraging and concerned for others, following up with phone calls if someone is missed at class or a dance event. The club president says, “I feel like I can rely on Anne always.”
Prior to her dance life, Anne worked in retail sales at Ames Department Store in St. Johnsbury’s three locations for 38 ½ years. She raised two daughters and is very proud to point out photos on her livingroom wall of her four grandchildren and four great grandchildren.
After ending fulltime employment, Anne began volunteering in her community and helping out elderly neighbors as a caregiver for eleven years. Anne became a member of St. Johns Church in St. Johnsbury in 1962. As she has everywhere, she is there to help out, supporting church activities and community members as well as making quilts for the Bicentennial. She taxis friends and neighbors to appointments and began going to exercise class in 2003. Since 2006 she has volunteered through the Council on Aging as the weekly exercise leader. In 2017, Anne Woods was honored as Queen of the East St. Johnsbury Old Home Day, a title for which she was both surprised and proud.
The Square Dance Foundation of New England in its efforts toward Preservation, Promotion and Perpetuation of Square & Round Dance is honored to present its Local Legend Award to Anne Woods.