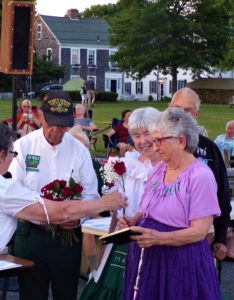 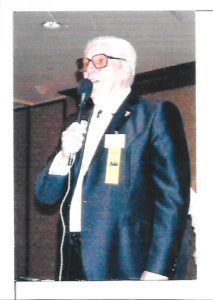 The Hall of Fame Award was established to honor those individuals and couples who have advanced the goals of the SQUARE DANCE FOUNDATION OF NEW ENGLAND by their actions within New England. These goals are the Promotion, Preservation and Perpetuation of the square and round dance activity.
Paul Letourneau was born April 20, 1927 and died on February 12, 2012. He and his wife, Lillian were married 64 years and 8 months, raising four sons Roger, Robert, Richard and Raymond and have 12 grandchildren and 20 great grandchildren.
Paul and Lillian began dancing in 1959 with Midd-Town Twirlers in Fairhaven, MA. Their first exposure to square dancing was at a demo at a BPA school meeting. Three couples attended and two couples of the three continued to dance.
Paul began his calling career in 1964. He called all around New England from Rhode Island to Maine. He called at his first New England Convention in 1967 in Pittsfield, Massachusetts and every year after that including 2011.
Paul LOVED square dancing! He was caller for Happy Time Squares in Freetown, MA, Jolly Stompers and the Council on Aging in Rochester, MA. He called for Midd-Town Twirlers of Fairhaven, Hobomockers in Abbington, MA , Happy Squares at the Freetown VFW and at the COA in Middleboro, MA. He ran the Mattapoisett Wharf Dances every Saturday night in July & August for several years and the Annual Dance Event every second Saturday of July, which is continued today by its coordinators Lillian Letourneau & Lisa Breault. It is fitting that we honor him at his dance today.
The Square Dance Foundation of New England in its efforts toward Preservation, Promotion and Perpetuation of Square & Round Dance is honored to present its Hall of Fame Award to Paul Letourneau through his dear wife Lillian.