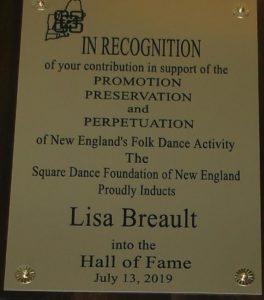 The HALL OF FAME AWARD was established to honor those individuals and couples who have advanced the goals of the SQUARE DANCE FOUNDATION OF NEW ENGLAND by their actions within New England. These goals are the Promotion, Preservation and Perpetuation of the square and round dance activity.
Lisa Breault began square dancing in 2000 with the Young at Hearts Square Dance Club of Abington, Massachusetts. She became interested in dancing after her kids danced for a year or two. She partnered with a family member for beginner lessons, and it’s continued from there.
From 2001 to 2003, she served as Banner Chairman for her club and extended as Banner Chairman for the Side Splitters and Swinging Squares from 2002-2009 and 2002-2019 respectively. What was most challenging here was coordinating three banner clubs to one dance.
Lisa was Secretary for the Swinging Squares Square Dance Club for 2003 & ‘04 and from 2007 to ‘15. She took a break from 2005 to 2007 to be Chairman of the club and has held the Vice Chairman position from 2015 to 2018. In 2018 she again took the position of Chairman and currently still holds that office. Lisa was Vice President of the South East Massachusetts Coordinating Association (SEMCA) in 2002. In 2003 she became President of that organization and continued until just a few months ago. She stays on the board of SEMCA in an advisory capacity.
Lisa must have been looking for a challenge as she joined the 64th National Square Dance Convention Committee as the Convention Secretary. This job began in 2010 and completed following the June 64th Convention in Springfield, MA in 2015.
At this time, Lisa has the New England scene covered by three very important offices, Secretary for the Eastern District Square & Round Dance Association (EDSARDA) since 2012, Treasurer for the Rhode Island Federation of Square & Round Dancer Clubs (RIFSRDC) since 2012 and Memorial/Tributes Chairman and Secretary of the Square Dance Foundation of New England (SDFNE).
As you see here, she is a coordinator and hostess for the Mattapoisett Wharf Dance since 2013 with Lillian Letourneau and many others in honor of their beloved friend and caller, Paul Letourneau.
Lisa served for two years as Eastern Regional Vice President for United Square Dancers of America in 2015 & 2016. In 2016-2017 she served as Secretary for the 58th & 59th New England Square & Round Dance Conventions (NESRDC) in Warwick, RI and is presently Secretary of the upcoming 62nd & 63rd NESRDC in Hyannis, MA.
Lisa works with high risk teenage students in Special Education. Her career spans over 20 years in both the public and private sectors.
The Square Dance Foundation of New England in its efforts toward Preservation, Promotion and Perpetuation of Square & Round Dance is honored to present its Hall of Fame Award to Lisa Breault.