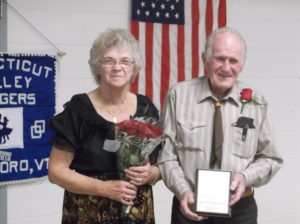 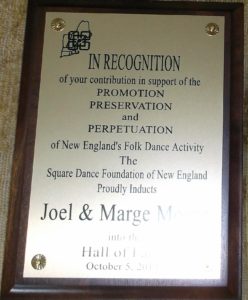 The Hall of Fame Award was established to honor those individuals and couples who have advanced the goals of the SQUARE DANCE FOUNDATION OF NEW ENGLAND by their actions within New England. These goals are the Promotion, Preservation and Perpetuation of the square and round dance activity.
Marge began square dancing with her husband, Bob, at Alconbury Air Force Base, England in 1971. After returning to Vermont, they danced at Connecticut Valley Swingers, graduating in 1985. Joel, with his wife, Betty, began dancing in 1986 in Bradford at the Connecticut Valley Swingers graduating as club members. The two couples danced together for a number of years. In 1996, after losing their partners, Joel & Marge started dancing together. They took round dance lessons for a year and a half.
They served as Co-President and Treasurers for Connecticut Valley Swingers over the years and Marge now serves as Vice President. They belong to three camping clubs, MontShire Campin’ Squares, Twirling Campers and National Square Dance Campers. They travel and step up to participate in activities like flipping pancakes and serving cake & ice cream. Joel’s maple sugar-on-snow is a big hit annually at Connecticut Valley Swingers. When asked about being angels, the response; “We never worried about the term, we just did whatever kept the club together and dancing.” Over the years, they’ve made phone calls and carried dancers on banner raids and danced in all Vermont Association Clubs to reach Good Neighbor Ambassador status in 2010 (having traveled for 10 years in the Good Neighbor program).
Marge & Joel chaired the Vermont Convention from 2010 to 2014 and co-chaired for many other years, being caretakers of the recycle racks and the whale-sized supply tote. They have participated in numerous nursing home visits, dancing and parading at town events, local fairs and on Channel 3 TV. The Moores attended many New England Conventions from the mid 1990’s. They were Hospitality Chairman for the 2004 & 2005 New England Convention in Brattleboro, VT. They attended 4 National Square Dance Conventions in Spokane, Oklahoma City, Little Rock and Springfield, MA where they were Co-Chairman of RV & Camping at the 64th NSDC®.
Joel & Marge support their nation and communities (Bradford and North Haverhill) in many local organizations and activities. Joel served in the US Air Force in Victorville, CA for 3 years, served his Town of Bradford as Selectman for 6 years and taught 25 years of Auto Mechanics at Oxbow Vocational Center. He was a member of the Evangelical Church of Bradford, during its construction. He helped with finish carpentry on windows and inside trim and sustaining as a trustee for 10 years. Marge began teaching in 1964 in Maine, working with youth in Arizona, and a private music company in Alexandria, VA. She taught music in New Hampshire and two years of music at the Department of Defense School in England. She has taught General Education in NH and Bradford, VT for 55 years. Her membership in the North Haverhill Girls Club keeps her busy with friends planning social gatherings, supporting scholarships and promoting events like “Christmas Trees Throughout Town”, encouraging positive community action. She is substitute organist in North Haverhill and two Ryegate churches.
Together Joel & Marge supported community youth by chaperoning teen groups (30-35 teens) to Wisconsin, Colorado, Kansas and Wyoming. 4-Hers look to their leaders as Marge and her sister have worked with young stitchers on projects for years. Check out the 4-H Building at North Haverhill Fair each year. The Moores for many years have worked the Fair Association Food Booth; Marge runs the booth, tending food sales and organizes the crew. Joel spent years as head griller. Joel tells about 5 AM breakfasts and family fellowship at the booth every year.
Reflecting about general square dancing, they enjoy the comradery of the square dance family, the cooperative workers and good friends.
The Square Dance Foundation of New England in its efforts toward Preservation, Promotion and Perpetuation of Square & Round Dance is honored to present its Hall of Fame Award to Joel & Marge Moore.
With heartfelt appreciation and gratitude,
Bud & Judy Clifford, SDFNE Awards Chairman