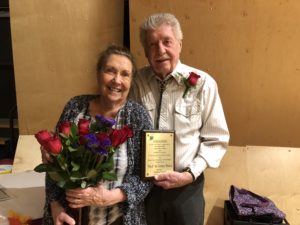 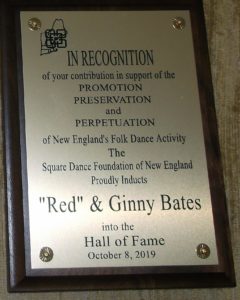 The Hall of Fame Award was established to honor those individuals and couples who have advanced the goals of the SQUARE DANCE FOUNDATION OF NEW ENGLAND by their actions within New England. These goals are the Promotion, Preservation and Perpetuation of the square and round dance activity.
Red started calling in 1950 at Springfield College in Massachusetts. He and a group of fellow students organized a band and after taking a calling class they began holding dances. They had to import ladies to dance as the college was all-male at that time. The dances were Eastern Style Squares. Soon after that new calls were added and the group moved to Western Style. This was before Callerlab, so calls were picked up from traveling callers who came through the area. Callers like Les Gotcher, Ed Gilman, Al & Bob Brundage and many others influenced the Red Bates’ calling choreography. Red said in those days “a caller could teach all the necessary calls to square dance in two weeks”. Many clubs were formed across the nation in the 50’s as well as in New England. During that rapid club increase, it seemed as if EVERYONE was dancing those days.
After graduation, Red worked for the Recreation Department in Philadephia, PA for a few years. Once they knew he was a caller the Rec Department sent him around the city to organize square dancing for kids. He furthered his college education and received a Masters Degree in Education and extended to a Level 6 Certificate, teaching in the Wilbraham Massachusetts School System for 30 years primarily as Guidance Director.
Red taught dance lessons for Hampden Promenaders, Longmeadow Square Dance Club, Russell Ridge Runners, Helderberg Twirlers of NY, Gadabouts A2 Club in Springfield, MA, Red Barons C1 Club in Woburn, MA, and Red Bates Square Dance Club and Buttons & Bows both in Venice, FL.
Red has called at every Square Dance Barn in New England; Square Acres, Bay Path Barn, Allen’s Homestead, Johnson’s Barn & Newton Pavilion to name a few. He has called at most major Festivals in the east and every east coast state, going out on their own to England & Canada.
Red Bates belongs to Springfield Area Callers Association, Connecticut Callers Association, was instrumental in starting NECCA and served as its Chairman for two years. Red joined Callerlab and was a 10-year member of the Board of Directors and Vice Chairman for one year. He has served for many years and still serves on several Mainstream, Plus, Advanced and Challenge committees.
“Red” & “Ginny” Bates
SDFNE Hall of Fame Award October 18, 2019

Red still maintains a full calling schedule in Florida during the winter and back to New England in the summer. He belongs to the Florida Callers Association, West Coast Association and Sun Coast Callers Association.
Red has taught at Callers Schools several times including his own for two years in the 60’s. His schedule has included 20 calling weekends a year in the past at both Plus & Challenge levels.
Recording on Red Boot, Red Boot Star, Hi-Hat, Lore, Jay-Bar-Kay and presently on Silver Sounds, Red can be heard in dance halls and households directing dancers by computer and vinyl. He says he has 30 recordings. In counting; there are 40 or more.
Red & Ginny still run the Tumbling Leaves Festival Weekend at Bennington College, Bennington, VT. This venture was started 29 years ago with Cliff Brodeur. Today we celebrate this event and those who run it.
Red tries to teach a new class each year and has been successful in adding many new couples to our area clubs. He still enjoys seeing new students grow to love the activity. He also feels fortunate to have seen the square dance activity grow from Eastern to Modern Western Style over the past 70 years!
The Square Dance Foundation of New England in its efforts toward Preservation, Promotion and Perpetuation of Square & Round Dance is honored to present its Hall of Fame Award to “Red” & “Ginny” Bates.