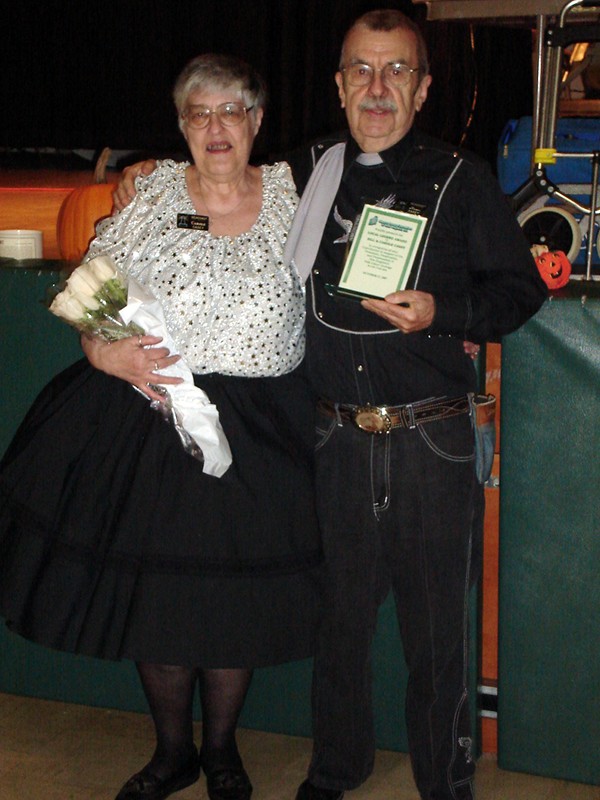 We are here today to present the Local Legend Award to Bill & Carole Casey who have given many years of dedicated service to this dance community.

The LOCAL LEGEND AWARD was established to honor those individuals and couples who have advanced the goals of the SQUARE DANCE FOUNDATION OF NEW ENGLAND by their actions within their local areas over the years.  The goals are the promotion, preservation and perpetuation of the square and round dance activity.

Bill & Carole Casey, by their spirit and dedication, have exemplified the true meaning of leadership in the Square and Round Dance Community.  Bill and Carole found a new way of life after graduating from a square dance class in 1970.  Not content to sit on the sidelines, this couple became immediately involved in the square dance community.  Starting on the nominating committee, they graduated again into the Vice Presidents position and next into the Presidents position of the Seacoast Region Square Dance Association. They have continued to serve in those positions and numerous other capacities, including class advisors, EDSARDA delegates, and on committees for numerous anniversary dances and dances on the vessel Mount Washington on Lake Winnipesaukee. Bill & Carole were also members of Legacy, and International Square Dance Leadership Organization.

The Square Dance Community is extremely fortunate to have couples and individuals, like the Caseys, who give so generously of their time and talents to support and perpetuate the legacy of square and round dancing in New England.  So, it is with great pleasure that we give this years Local Legend Award to Bill and Carole Casey of the Seacoast Region Square Dance Association.

With heartfelt appreciation and gratitude,

of the Square Dance Foundation of New England