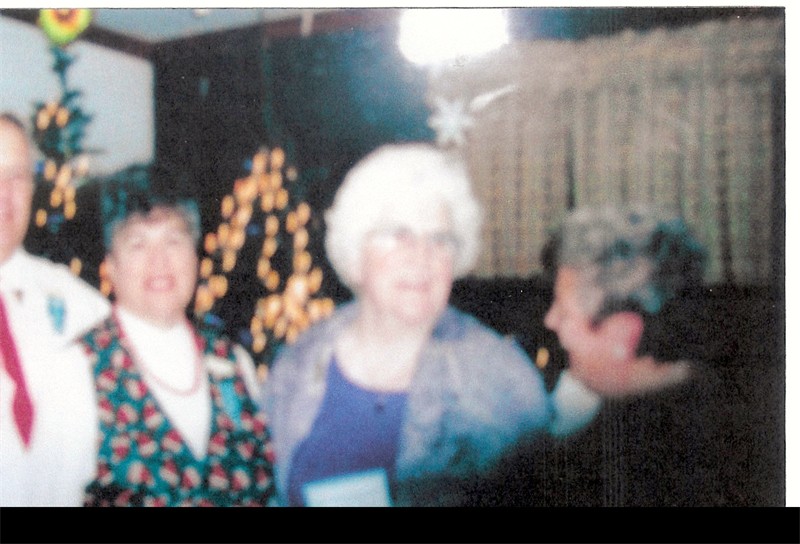 After the New England Convention when the Yankee Clipper award was announced several people in different parts of Vermont mentioned that they knew of someone whom they thought also deserved some kind of recognition, mentioning Edith Selby’s name, and their reasonings why. Then, when the Square Dance Foundation of New England decided to establish its Local Legends Award, we decided to submit the name of Edith Selby for this honor. (But have not mentioned this to anyone.)

Having moved to the Northeast Kingdom after Lloyd Selby died, we did not have the privilege of knowing him, but from the first time we met Edith we were impressed with her friendliness, her sincere interest in everyone who came to the dance. As we’ve listened to various peoples in different areas talk, we’ve learned that she was the quiet, but driving force behind much of the success within the North Country Swingers. We also learned about people who began their square dancing at North Country Swingers whom she encouraged to introduce the activity back in their own area and also of a few who had become callers after getting their start as dancers at North Country Swingers.

It all began in the early 1970’s when Edith Selby and her husband, Lloyd, of Derby Line, VT accepted an invitation from their niece Joyce Jacobs in Jeffersonville, VT, to come down on a Wednesday evening to try their hand at square dancing. It had taken a bit of persuasion on Edith’s part to persuade her husband to make the long trip, but once there they both became _hooked  returning to join the weekly sessions and graduate with that first class. The Selby’s so thoroughly enjoyed the activity and impressed with the caller, they asked him if he would come up to Newport (near the Canadian border) to teach a group that Edith would assemble. The caller agreed and the rest is history.

As a result of spending many hours on the telephone inviting people to that first gathering, a lot of interest was shown from people on both sides of the border. The Selby’s enthusiasm was contagious. In fact, a Canadian couple who were experienced dancers, used to come across regularly to help with the new dancers. Soon others came to help with many staying to dance. As interest and attendance continued to grow and friendships formed, it was only natural that the idea of starting a square dance club in this northeastern corner of Vermont took root. By 1973 North Country Swingers formally came into existence with Edith & Lloyd Selby the first presidents.

Over the years the Selby’s have held many offices in North Country Swingers. They always made their officerships a joint effort. Lloyd held the office and conducted the meetings, etc., while Edith did the entertaining – the cooking – the recruiting – the promotion – providing the behind the scenes hospitality setting the pace of hospitality and friendliness for which the club became known. Together Lloyd & Edith created and guided North Country Swingers thru its infancy and growing pains into a full-fledged square dance club always being strong advocates of the fun and friendship of square dancing. If things weren’t going well, it was Edith who kept things going – who wouldn’t quit – whose faith and encouragement sustained Lloyd and the club.

Always there to help with the regular class, Edith soon realized that some people needed more time and practice to master certain calls than it was possible to give at regular lessons. So Edith began taping the lessons. Then she would invite people to their basement for workshops. As the club grew, these tape workshops in the Selby’s basement, with the Selby brand of T.L.C. became a regular occurrence. Square dance potluck get togethers, with Edith providing a lion’s share of the food, also became a fairly regular occurrence.  The Selbys hospitality and graciousness knew no bounds. The writer of the song that mentions the “hostess with the mostess must have had Edith in mind. Since Newport/Derby Line is off the beaten track, Edith has always opened up their home to feed and provide overnight accommodations to visiting callers  and still does.

Many of the “little” extras now taken for granted were a result of their enthusiasm for the activity. To promote fellowship with other dancers and clubs in the area they encouraged North Country Swingers members to join them as they traveled to dance at other clubs which in a short time turned into the idea of banner raids. Even today Edith can still be found participating in their banner raids.

When members wanted to get together in the summer, the Selby’s hosted picnics at their home which always included some dancing. An annual club event they instituted in 1974 was sharing the Christmas spirit with all their square dancing friends thru a dinner and dance. Held in early December, dancers and former club members still gather from all over the state to start the holiday season in this manner. It was Edith who also started reunions so that people, who for one reason or another had had to drop out of the activity, could still gather together for fun & fellowship. The Selby’s were also instrumental in organizing and promoting the “Dance in the Clouds” annual weekend at Jay Peak. Shortly before Lloyd died they hosted a square dance at a local school in honor of their 50th wedding anniversary.

As dancers became more numerous and more people became interested in calling it was only natural clubs would form in other areas in the Northeast Kingdom and nearby counties. The Selby’s not only encouraged these clubs to form but also instigated working with them to coordinate joint activities picnics, celebrating Vermont’s Bicentennial, etc. As the various clubs developed, Lloyd & Edith recognized a need for communication and working together with other clubs in Vermont and bordering states and became active in the Vermont Association of Western Square Style Square Dance Clubs (VAWSSDC).­

To digress a bit – one of Edith’s pet projects was/is the Haskell Library. This is a one-of-a-kind building which straddles the border at Rock Island, Quebec, Canada and Derby Line, Vermont, USA. With so many Canadian members, it was a natural place to follow up on a suggestion from a member to hold a “Hands Across the Border Dance”. To avoid conflicting with any other club’s regular dance night, this event was scheduled for a Sunday afternoon with the Selby’s hosting the pot luck afterwards at their home. This was repeated for several years and quite naturally turned into an annual event. In time the dance was attended by so many people Edith reluctantly had to admit the pot luck had outgrown her home and so the pot luck moved to the Stan stead South Church in Rock Island, Quebec.

Edith does not profess to be a caller nor a round dance teacher. But in order to create an interest in square dancing among the local children, she purchased some teaching records and ventured out teaching square dancing in the local schools and surrounding areas – Morgan, Derby Line…even as far as Hyde Park & Morrisville, fifty miles away. She has spent many an afternoon traveling to the various schools to introduce different grades to this activity.

When North Country Swingers celebrated its 25th anniversary in 1 998 it was Edith who organized and hosted an “Appreciation Dance” and Luncheon cruise for dancers in the area covered by the VAWSSDC.  During that summer North Country Swingers co-president distributed white quilt patches to the many square and round dancing friends of Edith with the instructions to create something using this quilt patch to bring back some special memory of them for Edith. While Edith knew such a project was underway, she had no idea of its extensiveness and of the love and caring that people would be able to convey using these white squares. 102 patches were made into a quilt which was presented to Edith at the annual Christmas Dance. Edith was overwhelmed with emotion to be honored in such a wonderful, thoughtful manner. The quilt is now hung in the entrance hall of her home_ You may have seen a picture of her quilt in the Northeast Square Dancer.

Square dancing is not her whole life though. As their children were growing up Edith helped lead the 4-H as well as assisted in the Sunday School of the Stan stead South Church. While Lloyd usually held the positions on the various Boards, Edith did her best to avoid holding offices, preferring to work behind scenes and be a hostess to committees who met in their home. Edith is a weekly volunteer at the Newport Chamber of Commerce ready, willing and able to promote square dancing, as well as Vermont, to anyone who is interested. In fact several people have characterized her as a walking Chamber of Commerce. Along with her other many and varied community activities, (including the Eastern Star, Hospital Auxiliary, D.A.R. and Vermont Historical Society) her most recent involvement has been serving on the first Board of Directors in supporting and raising money for IROC – Indoor Recreation of Orleans County. This dream became a reality last Spring…and in time which include a rec room for neighborhood meetings and square dancing.

Lloyd was president, from 1959 until his retirement in 1981, of the National Bank of Derby Line which evolved into the present multi-branched Community National Bank. He was a highly respected officer in the Vermont Bankers Association as well as an active member of the Boston Federal Reserve Advisory Committee.

Besides listening to dancers talk, we’ve read thru the North Country Swingers anniversary notebooks and talked with her niece Joyce Jacobs in Essex Junction – and have realized how many lives the Selby’s have touched in the square dance activity with their caring, sharing and building of this club. The Selby name is well known by those in the Vermont Association of Western Style Square Dance Clubs, by the callers, cuers and dancers alike. While they may not have done much outside the state (although they were involved when the New England Convention was in Burlington in 1983 & 84), they have certainly been one of the mainstay and driving forces behind the success of square dancing within much of Vermont, especially northern Vermont. The Selby’s dedicated service to square and round dancing has certainly been of an exemplary nature. Lloyd’s club foot and subsequent operations did not lessen his interest and participation in the activity. Lloyd’s death did not diminish, nor slow down Edith’s role or participation in the activity. (Should the committee decide to honor Edith, it might think about including, the late Lloyd Selby in the write up, as he was a big part in it during his lifetime.) While she no longer dances every tip during the evening, she misses very few of the club workshops, dances, special activities, raids, etc. She is still in there encouraging new officers, callers and cuers, attending and supporting classes, going on raids, hosting visiting callers, bringing the dance activity to schools, etc. Her enthusiasm has not dimmed over the years.

Square and round dancing is people coming together to have fun and fellowship; to work together; to do things for each other. It is people who care about each other and people who take time to share time with each other. Many lives have been forever enriched because of Edith Selby. In the mid eighties, she is like the “Eveready Bunny” still going, still encouraging, still in there promoting. Would that there might be many more Edith Selby’s in this world.